Well while watching some animes, you might get confronted with certain physical theories. As examples: To Aru majutsu no Index series, Noein, Zegapain, Uchuu no Stellvia, Crest of the Stars and Planetes. There are many more animes, but those are the ones I remember.

I’ll start with index. First of all the Rail gun of Mikoto. A rail gun is actually a simple weapon if you look at it from physical terms. It’s just a little hard to construct, in a usable manner. A rail gun fires a projectile by first accelerating it through alternating magnetic fields. A magnetic fields induces a counteracting electrical force in the projectile, so that if you change the magnetic field, the projectile is accelerated. You might have heard about that end of world scenario in 2008 in the LHC of the CERN complex. That Large Hadron Collider is a Circular rail gun, accelerating particles. The theoretical maximum speed is the speed of light. In theory a rail gun would be a great weapon, but it’s hard to build such a small one, and it is even harder to find a reliable power source. 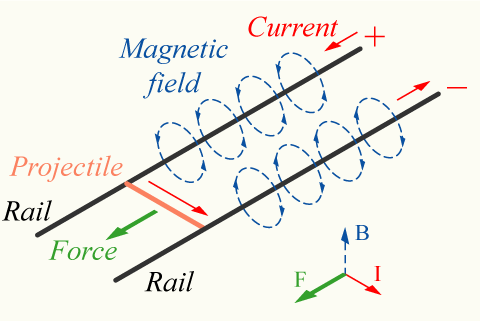 Next is the Schrödinger experiments. At Schrödingers times, he was thought to be crazy because of them, but today they are the basics of quantum mechanics. Take a air-tight metal box, but a cat, a gas-grenade and some radioactive particles with a 50% chance of decay in one hour. You can’t look inside the box. After one hour, you have to ask yourself one question: Is the cat still alive, or is it dead. You won’t know without looking. In theory, the cat is now in Super-position. Super-position is when a quants (an electron if you want) properties cannot be discerned. For the cat, that means, you don’t know the state the cat is in. To figure out what state the cat is in, you need an observer. The problem that quantum mechanics face is that the act of observation actually modifies the state of the thing that is observed. Another problem is, that an act of observation even a collision with a quant (a light (not as in weight, but the thing that makes you see things) particle) This principle is used in Noein and Zegapain. In Noein (Spoiler warning), the Protagonist is killed one time, but due to the fact that quantum existences are not able to observe him, he could be saved. It means if something happens to you, it has to be proven by an observation. Well, that weird stuff is why I stopped wanting to study Physics after school.

Another quantum mechanical theory is the multi-verse theory, also applied in Noein. Imagine a yes or no decision. if you decide for yes, humanity will survive, if you say no, an alien race will take over earth. Now let’s say you said yes, then your dimension would be safe. At the same time, another identical dimension is created, but there, you will have decided to say no. That leads to an infinite amount of dimensions. This is applied in Bokurano as well, but there, they also added a solution to a problem we would face. (I suggest that you watch it). This theory is also represented in one of the cosmology factions among physicists. There it is a more realistic scenario: Instead of just one Big bang, there were countless others, but since there is nothingness between our universe and the other one, we can’t observe them.

Now I’ll get to Uchuu no Stellvia. There a Super Nova causes terrible damage to the earth. It is true that a Super Nova could cause damage, but not to that extent. First of all, a Van Allen belt would catch the brunt of the electromagnetic impact, and the balck hole at the center of the galaxy would attract the material wave. Since our earth is at the outermost part of the galaxy, it would be relatively safe. I don’t remember anything about what might be the cause for the dimensional rift following that.

Crest of the Stars introduces Anti-Matter fuel. Anti-matter is not what most people believe it is. It is not matter that can destroy everything.Actually there are different types of anti-matter: Anti-Electrons (positrons), Anti-Protons, Anti-neutrons, Anti-Hydrogen, Anti-Helium… (insert every element you can think of). Science was only able to create anti-matter up to Anti-helium. If an Anti-electron fuses with an electron, both are destroyed, setting free the energy that both of them contained. Having said that, the highest possible efficiency is 100%, meaning that it is not a regenerative energy. Actually with our current technology the efficiency is at  about 0.0001%, and we can’t stabilize them. Here a layout from NASA:

Next is laser weaponry. Believe it or not, lasers are already part of our everyday life. Well, at least, in Berlin there are around 500 arthroscopies a day, which are using lasers to either cut or weld gristle inside joints. It is used in plastic surgery to permanently get rid of hair, or to correct the eyes lenses. Having said that, laser weapons are highly inefficient. First of all, a laser is highly concentrated light. With our current technology, you need a 15 cm barrel to have an almost loss-less beam of 20 cm. At 50 cm, you can only use it as a flashlight, it won’t harm anyone. That is because of air resistance, refraction due to temperature and pressure differences and the inability to focus the beam properly. In space we would get rid of the air resistance and temperature and pressure differences, but there, you need to consider magnetic fields of planets and other metallic bodies. Here is an example of 2007, as you can see, laser-weaponry is already being applied, but it has it’s limits:

Next gravitational fields, as seen in Planetes. Through orbiting in a gravitational field of a planet, objects can gain a very high speed. For a satellite to gain enough speed to leave our solar system, gravitational fields are necessary.  it is not realistic that they are picking up trash flying around with 8 m/s, as it normally would tear of your hand, due to inertia, unless your relative speed is close to that of the object you want to catch. That said it is a huge fuel waste to accelerate and then decelerate again, just to gather trash. Gravitational fields have some interesting things about them. For example, the heavier the object that is generating, the field, the more it slows down time, and it refracts light. Extremely strong fields can also dissolve matter. That is seen in black holes, but it actually would be interesting getting sucked in by a black hole. The closer you get to being dissolved, the more time slows down. In theory it would never end, as in the end an earth-second would take about 1000 years. Here is an example of how gravitational fields are represented in cosmology. Instead of a grid, imagine a linen sheet being there. If you hang every corner, so that the sheet will be stretched, and put lot’s of small plastic balls on there. Spread them out evenly, and then put a heavy iron ball in the middle. All the plastic balls will roll towards the iron one. of course, the heavier the ball in the middle, the more it will cause a deformation of the sheet. Accumulated it will look like this.:

Another thing Planetes applies are fusion engines. A fusion engine uses the mass defect. If you fue two hydrogen atoms, each with a weight of 1 unit, you would think that the H2 weighs 2 units, but in truth it ways a little less. Not that one could actually determine it easily. That little bit of mass that is lost turns into energy. Actually that is one of the most efficient energy transformation processes in our universe. While it is called nuclear fusion, it does not emit any radioactivity. The problem we are facing is that we cannot stabilize the fusion reactor. It just cools down after some time (I read an article about the longest fusion process being a week long up until now). it is the same process that our sun utilizes to provide us with light, which heats up the earth, is the cause for wind and which we utilize nowadays for solar energy. It is not infinite, but we can use about 40 elements for fusion. Here is a schematic overview of what our sun does on the surface, which is fusing Hydrogen to Helium:

Another thing is the AIM dispersion field known from Index. It is more of a psychological phenomenon, that each person has a personal space (we refer to it as privacy), that does not have to be real space, but can range from intellectual freedom, to the freedom to move around. If someone infringes on that space, humans supposedly react angered (it is a theory). If some personal spaces come into contact, and share some aspects, new things are born from them: friendship, love, hate, companionship, children (yes, the theory includes that), and many more things. As it is a psychological (I would even say sociological) theory, it does not really have any physical impact, but if there are things like extraordinary powers, then they are related to that field, as it is the imagination and self of a person.

I think that wraps the animes up that I mentioned at the beginning. In general, animes try to apply physical laws, the success varies,but it’s good for getting a basic overview of things. Actually, after reading through some U.S. patents, I believe that some series could get a patent on their ideas concerning physics. Now that you also know Schrödingers experiment, you might now why you should not name your cat Schrödinger (Referring to To aru majutsu no Index).

Post Script: Actually I’m surprised that the Blog-spell-check doesn’t like the word anime. Also, if you are interested in other technologies or physical backgrounds, just tell me, I might make a second post if there are at least 5 questions. I won’t guarentee that I’ll be able to answer everything, but I will try.

This entry was posted in Educational and tagged anime, Bokurano, Noein, Physics, Planetes, Sci-Fi, Technobabble, To Aru Majutsu no Index, Uchuu no Stellvia. Bookmark the permalink.

10 Responses to Physics in Anime