Pumpkin Scissors starts off in a war torn pile of ruins, where an armistice between the empire and the republic is announced. Five days earlier the same happens at the graduation ceremony at an officer academy. The Pumpkin scissors is a military division of the information department that works on removing the aftermath of the war, meaning: rebuilding tunnels, do charity work and hunt down and observe rebels. They consist of the hotblooded 2ND Lieutenant Alice Malvin, the chubby Captain Hunks, the Warrant officers  Martis and Oreldo, the caring Sergeant Major Lili Stechin and the message dog Mercury (In the french manga he is referred to as  “le chien postal, Mércury”).
On their first mission they meet the slow giant Orland, a former special ops Anti-Tank infantrist, who chooses to join them. After that they try to help the people by rooting out corruption and decadence. 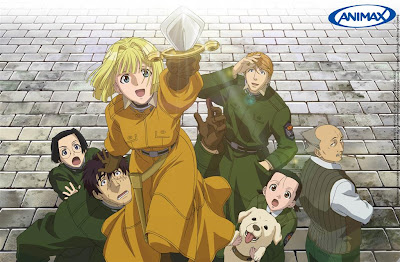 First of all, the anime is open ended and continued by the manga.  It covers the first six volumes, and I already reached volume eight, in the french edition. Since the anime covers the first real story arc, and never leaves the empire, it made me believe that it is more of an isolated isle, instead of an empire. It depicts post-war situations almost perfectly, and still adds some unique things to the war.

If I had to put it in an era, I’d say it’s placed somewhere between the WW1 and 1960, since the Tanks resemble post WW2 designs, while artillery, gas-attacks and infantry concentration are taken from WW1. The lack of planes makes it seem as if it were of 1890. The next interesting thing is the depiction of royalty and their corruption, with the “Silver Wheel” as the corrupter. The division naming and nobles remind me of Prussian naming schemes, but that is an entire different thematic, that I might investigate some other time.

Also the refugee situation is, all in all depicted nicely, and the solutions for them are probably some way of telling us: we should deal the same way with them, as refugees all over the world are still not equal to the local populations.

Another interesting fact is, that the “Invisible 9” experimental infanterists, were research projects of Germany in WW2, that means of the Nazis. Although mostly failures, the research data is still relevant today, although it was collected in an unethical manner.
The discrimation in between the military divisions also depicts today mainstream vs. niche confrontations, that at least I find in my surroundings, as well as the disregard of militias, that are simply seen as terrorists in the modern day society. All in all I think it to be a pleasant anime, with an even better manga to continue it. It is licensed by Funimation and the manga is licensed by Del Rey, which is why you won’t find it on BBT, but if you are interested in buying it, it is definitely worth the time and money. Del Rey dropped the manga after finishing volume 6. It is licensed in french by Pika Edition? and they are releasing bi-monthly.